That pesky thing called work has gotten in my way the past few days, but I have managed to get some things done.  I made the main and secondary spars for the right wing half using 3/32" hard balsa then made sure every rib joint was tight as a drum with a complete dry fit assembly first.  Then came the Tightbond, some weights along the trailing edge to make sure it stayed straight and level, and voila, a new right wing half.  Obviously, I need to add a lot more wood to the picture, but you get the drift.

I also managed to cut 1/16" ply for the wing joiner ribs, but I will wait until I get to the point where I can do alignment of the wing halves before installing the joiner system and end ribs. 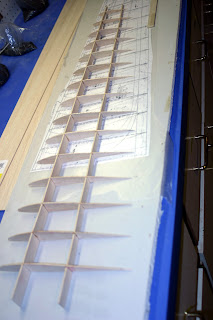 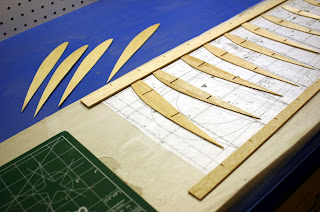 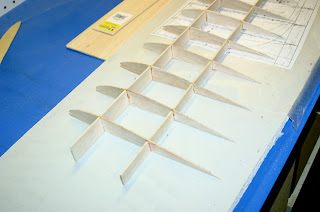