The gull is framed

I'll admit.  This is the part of the build that most intimidated me, and it feels really good to be through most of it.  I like to do the hardest things first, but I imagine the fuselage will throw some curves at me too.

below is a series of shots of how I assembled each gull half.  After flying the Playboy today with fellow clubmates at the sailplane field, I was anxious to get back and glue this thing up.

First, the crappy picture.  I should have gotten the tripod out, but you'll get the drift.  In order to make sure I had the main spar square to the subspar, and straight to the rest of the assembly before I screwed down the bases, I got out the laser beam and aligned everything with the main spar. 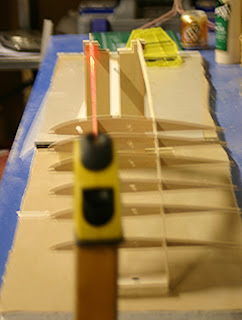 Then I added measurements to the drawing so I could make sure each individual rib was lined up correctly.  First, I drew a line under the gull on the plans from the root to 7" directly below the tip joint.  Then I measured straight down from the bottom edge of the spar to the line, and added 1/8".  This addition of 1/8" is to make up for the up-sweep from the bottom of the rib(spar) to the leading edge groove.  Then as I assembled the ribs, I measured each one so it matched the plans.  At the rear, I used the spar template to make sure the trailing edge tips stayed in alignment.  You can see the results below on the starboard gull assembly. 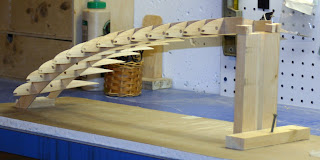 Then came the leading edges.  These stacked assemblies weren't holding their shape very well, and I needed them to be dead on because I didn't want to add any stress to the gull assembly as I was putting it together.  What I found was that my heat gun did a great job of allowing me to bend a little at a time and get the leading edges fit perfectly.

And finally, a mockup of the gull assembly!