Yesterday I managed to make some progress on the two piece trailing edges of both wings.  No big deal here, just used some medium grade balsa that was free of warps and attached one side at a time starting with the bottoms.  I did bevel the top pieces along the trailing edge so they made a nice, tight and straight joint.  I also made sure the wing was perfectly flat and level as the pieces dried.  No use introducing warps at this point!

I also started prepping for the leading edge sheeting by soaking 2 pre-trimmed pieces for the tops.  The curve of the rib profile isn't too extreme, but I'd rather not have to wrestle with the balsa and risk splitting it during the glue up process.  Plus, pre-bending makes it less likely to introduce a warp.  I wrapped the soaked wood around a large 3" mailing tube and held it tight using rubber bands, and after removing the pieces this morning they look like an almost perfect fit. 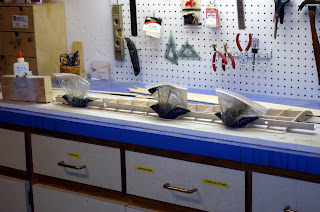 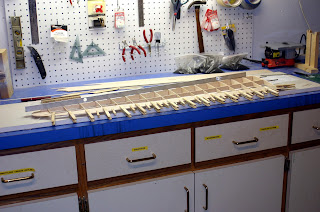