How about something new.

My first bi-plane of any kind, and in this case, it's a Peter Rake designed R.A.F Be12a from WW1. The Royal Aircraft Factory B.E.12 was a British single-seat airplane of The First World War designed at the Royal Aircraft Factory. It was essentially a single seat version of the B.E.2.
Intended for use as a long-range reconnaissance and bombing aircraft, the B.E.12 was pressed into service as a fighter, in which role it proved disastrously inadequate, mainly due to its very poor maneuverability.

If interested, you can read the rest here:  http://en.wikipedia.org/wiki/Royal_Aircraft_Factory_B.E.12
One of the primary reasons that I wanted to build this particular plane was it's combination of size, weight, and scale appearance.  I wanted a scale subject that I could sink my teeth into, but at the same time have something that would be easy to fly and relatively docile for those relaxing evenings at the local park or flying field.
So far, I have the wings 90% complete and have just started the fuselage.  I'm learning all kinds of nuances to building these planes, mainly the need to think ahead more than normal. For example, making accommodations for rigging is one of those things I've never had to do and so far I'm enjoying the learning experience.
I wish the build was going faster, but it is still nice weather which means family, biking and flying.  The build will accelerate as the weather turns sour. 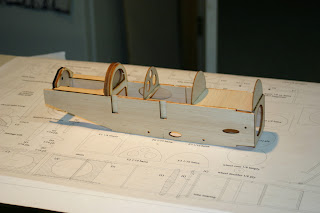 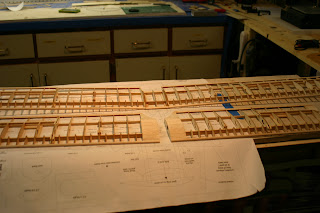 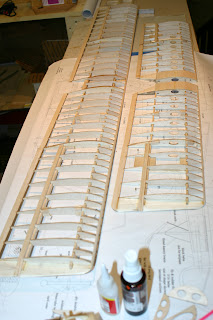